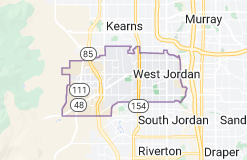 West Jordan is a city in Salt Lake County, Utah, United States. It is a rapidly growing suburb of Salt Lake City and has a mixed economy. According to the 2010 Census, the city had a population of 103,712, placing it as the fourth most populous in the state.